Man on the move: Brian Martin 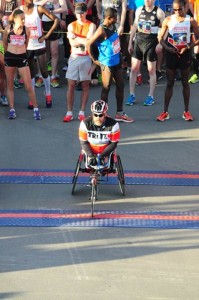 For Brian Martin, the challenges and opportunities of a fresh start in 2015 can’t come soon enough.

This May, Martin is racing in the wheelchair category in the Scotiabank Calgary Marathon Charity Challenge for Accessible Housing. In last year’s Ultra Marathon Wheelchair category he placed first with an impressive time of 4 hours and 11 minutes. Despite this achievement, 2014 was not an easy year for Martin. With his marriage suddenly over, extra weight to lose, and a disappointing time at the 2014 New York Triathlon, it would be easy to cancel his plans for another race. Instead, Martin is re-calibrating and focusing on getting lighter, faster and stronger through self-care. Martin says that training and racing allows him to be a better father to his three young children. “I can’t kick a soccer ball around, but I can do a lot of other things. I want to show them I can go out, be active and have fun – that you don’t give up.”

To get ready for the starting line in May, Martin will begin 2015 with a rigorous training schedule, working out five days a week at home on his hand-cycle trainer and lifting weights. On cold days, he’ll swim and lift weights at the Talisman Centre and when the weather improves he will train on his hand-cycle in North Glenmore and Fish Creek Parks. He hopes to race at the Chicago Marathon and New York Triathlon this year as well.

No stranger to challenges, Martin was injured in a motorcycling accident nearly 14 years ago but is always looking for ways to get active and push himself further. His first marathon was in 2008 and he has completed over 20 local triathlon events. He also attempted Ironman Canada in 2011.

His words of wisdom for anyone considering their first marathon – despite his obvious dedication, he suggests that the most significant ingredient in his success is just about showing up. “It doesn’t matter how you got to the starting line, you got there.”