The Story of a Friend-Maker 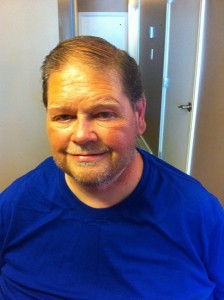 I want to share a story about one of our residents at Foundation Place. It is related to a recent life event that has been sad and challenging but also moving and inspiring.

In June of last year Ken moved into Foundation Place. In hospital speak he was a double ABK (both legs had been amputated above the knee). Ken had lived with a number of health issues that led to this circumstance, the primary cause being an illness called Peripheral Arterial Disease also known as PAD. In fact he had even become the face of Calgary Health Trust Vascular Care of Alberta after agreeing to have his story and image shared with others in a pamphlet that provided information about individuals with vascular disease. He also had diabetes and attended dialysis three times weekly.

When I first met Ken he was in hospital at Peter Lougheed. Ken had been looking for an accessible home for several months as he was now wheelchair bound and unable to return to his previous home. Initially, he seemed very anxious about coming to Foundation Place. He peppered me with loads of questions about accessibility, transfers, staff, the other residents, supports, and the philosophy of the program. He liked the idea of being a part of a community that supports each other but he also seemed nervous about making a move.

When Ken moved in a couple of weeks later he admitted to having trouble sleeping the first couple of days but that he was getting more and more comfortable. He quickly arranged his own phone and internet, purchased a large flat screen TV and had his room set up to meet his needs. It immediately became apparent that Ken had an active social life. He had family and friends coming by every weekend and sometimes during the week. He became a social hub for other residents, often spending time in the common area and outside on the deck chatting and joking with everyone who came by. On several occasions he invited other residents to join him for dinner and he organized group meals of take-out food that residents paid for themselves.

Ken was very generous. He wanted to make others feel welcome and he rarely talked about his own issues. He was more concerned about those around him than himself and did not like to talk about his struggles. I knew he had very intense phantom pains but I really had to pry this from him. He admitted to sometimes feeling depressed and it was clear he still mourned the loss of his legs. He once only spoke to being tired of spending a large portion of his life hooked up to a dialysis machine. Yet Ken always seemed to bounce back from difficult moments with a spirit of resilience. Life was clearly a challenge but he offset the difficulties with an abundance of positivity.

Another trait that soon became evident was Ken’s sense of gratitude. He often told others that he was so thankful for Foundation Place. He regularly voiced his appreciation of staff and to Accessible Housing for allowing him to return to community and provide a home that was safe and accessible, a home that allowed him to share his life with others and make a contribution. He also helped greatly when a prospective resident came to tour the home and he shared his own experience – how nervous he had been at first when he first arrived but also how quickly he had come to realize that Foundation Place was a great home for him. That resident moved in several days later and they soon became close friends.

Ken loved to laugh and sing. Voicing the lyrics of Uptown Funk he would often sing to other residents, “Don’t believe me just watch, don’t believe me just watch!”. He would send other residents texts saying “Come watch Ellen, it’s time to dance”. His booming laugh could often be heard throughout the house. It was genuine and his spirit of playfulness was contagious. He was easily amused, he loved to chat, and his quick wit was always ready to enter the conversation.

On the evening of February 13th Ken was sent a text by a resident wishing him a Happy Valentine’s Day. He texted back telling her to wait and tell him in the morning. Early in the morning of February 14th Ken passed away from heart failure. On a day when we celebrate love with images of hearts, the heart of a loving man stopped beating. I don’t write this as a Program Coordinator or as a staff member of Accessible Housing. I write this as a friend because on Valentine’s Day we said goodbye to a wonderful man with a love of life who had become a good friend. It is my sincere wish that with Ken in mind the staff and residents of Accessible Housing are inspired to find more time to laugh, sing, dance (with Ellen), and are able to keep up the spirit of “Don’t believe me just watch!”

Ken’s memorial was on March 7, 2015. More than 300 people attended. Wherever Ken went he made friends, whether it was in his home town of Beiseker, the 14 years he spent in Yellowknife and Inuvik as a travel agent, at the hospital, at dialysis, or at Foundation Place. His mother said that to meet Ken once was to know him for life. It was easy to see why. We only knew Ken for a short period but we are better for it. His memory will be kept alive for a very long time. The card from his memorial aptly states he had a nature you could not help loving, and a heart purer than gold, and to those who knew him and loved him his memory will never grow old.