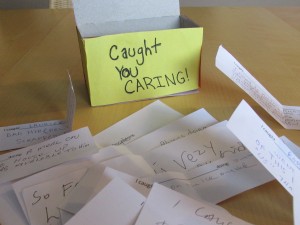 On December 6th, our Newbridge Group Home celebrates a very important first birthday. A total of 14 people have been housed at Newbridge in the last year and the eviction rate was zero. Before making Newbridge their home, seven of the residents were staying in emergency shelters, four were in hospital, two were couch surfing, and one was staying in a motel. Eight of these fourteen people were exposed to or fleeing domestic violence.

To help people transition from homelessness to homefulness, the Newbridge Group Home is staffed 24 hours a day and seven days a week and provides not just on-site case management and daily living support but also focuses on community building. This includes regular communal meals, a community garden, a “Caught You Caring” box and more. Lacey, a Support Worker at Newbridge Group Home championed the new “Caught You Caring” initiative and had this to say about the big impact of a tiny box.

“Adjusting to living with others after the isolation that is homelessness can take people some time. When staying in shelters people need to have a rough exterior to help protect themselves and that takes some time to shed. At the Newbridge Group Home we noticed a lot of people being quick to point out when someone else in the house broke a rule or did something wrong. This was making it hard to build a peaceful positive environment.”

“We decided to start a “Caught You Caring” box as a way for both residents and staff to acknowledge the acts of kindness and to promote positivity in the home. It’s simple. When someone notices a resident or staff member doing something caring, helpful or generous they write the person’s name and a short description of those actions on a slip of paper and pop it into the box. After just the first week of doing “Caught You Caring” one of the residents expressed to staff that she really could feel a positive difference in the home. She felt this was because people were taking the time to look for the good things they do for each other. We are on our third week of collecting the slips and the box might not be big enough! The slips are read aloud at our weekly tenant meeting and it is one of the highlights of the week. Residents have thanked and acknowledged each other for things like cooking and sharing a meal, spreading salt on the sidewalk, assisting each other with something tricky on the computer, doing dishes, or having a happy or grateful attitude.  At Newbridge we have our ups and downs but by cultivating a community that cares about each other, we help people thrive and grow.”

Check out Newbridge’s big milestones in this handy infographic.  1 Year at Newbridge