Kids and a Cause 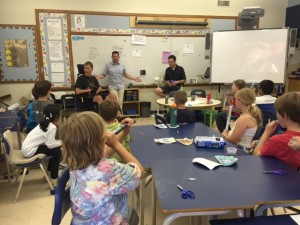 When elementary school teacher Sonja Hunter’s grade 6’s attended an event called We Day last November she didn’t yet know impactful the day would be.

At that event beaded bracelets called rafikis (the Swahili word for “friend”) were for sale for $10 to raise money to help oversees communities. Some of her students could afford them but many of them could not. As Christmas gifts for each of the students she decided to use some of the thousands of beads she’d accumulated over the years to make them their own bracelets as a symbol of their participation and to spark a conversation about social activism. They loved their bracelets and asked if they could start making their own to sell to other kids at the school, and then give the money to a good cause.

The first day of crafting, none of the needles worked. They were too large, or the beads were too small. Hunter remembers, “There was my class of students, the day before Christmas break, SILENT, tongues between teeth, trying to thread beads one at a time onto thin elastic thread.  It was painstaking work. They loved it. Once we started making the rafikis we didn’t really talk much about other fundraising ideas; then it became more about what other causes would we like to support. That was an amazing set of conversations; and out of that was born a class of social justice activists.”

The project was a hit. “We raised the $50 the first day we sold the rafikis and we realized we were on to something that students loved.” says Hunter. “Children from other classes even joined in.”

Along the way Hunter spoke with people about the classroom initiative and received donations of beads to keep the supply up.  Local ceramics business The Fire Escape helped by selling the bracelets at their location. The entire class participated in their own unique ways. Some students made posters for the school and Fire Escape. Some gave a talk in another school classroom, or made announcements while others kept the class focused on causes.

The class didn’t track how many were sold but bracelets were priced at $5 and $3 for two different lengths and a total of $1576 was raised. Four organizations received funding and each group was chosen by the students. Of this total, an amazing $712 went to Accessible Housing’s efforts in the Scotiabank Calgary Marathon.

Hunter noticed early on that the project had become an empowering endeavor. “We started small, unsure of our potential and our ability to do BIG stuff.  We quickly realized that we had a beautiful idea that others were willing to support us in.  Then we started to dream bigger and bigger. Now we get to stand back, out of their way and let the power of what they’ve accomplished fuel what they will take on next.”