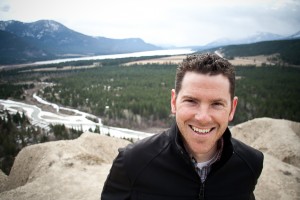 Every year since 1998, Avenue Calgary has named forty local educators, innovators, entrepreneurs and leaders to the Top 40 Under 40.  This year Accessible Housing’s Executive Director Jeff Dyer has been recognized as one of these compelling Calgarians who does more, better and faster.

At just 39 years old, Jeff Dyer has already achieved more than many. Full of innovative ideas and the skill to implement them, he leads with integrity and charisma that motivates others to get involved.

For more than 11 years, Dyer has dedicated himself to bettering Alberta communities and improving the lives of thousands of individuals in need. In his current role as Executive Director of Accessible Housing, Dyer works to open doors to accessible and affordable homes for people with disabilities. By fostering new and innovative ideas, he is breathing new life into an organization facing a changing social policy landscape.

As part of Jeff’s role at Accessible Housing, he sits as a steering committee member for the RESOLVE Campaign – a joint venture of nine partner organizations looking to build affordable housing in Calgary. Dyer is responsible for overseeing the development of 45 new affordable, accessible homes. The campaign as a whole will raise $120 million.

Wherever Dyer leads, he strives to create an inspired workplace where employees love coming to work and are motivated to make a difference in the lives of every person who comes through the doors. Jeff has an uncanny ability to see strengths in those around him and consistently builds exceptional teams. As COO of the Mustard Seed, Dyer launched a leadership greenhouse to help cultivate leadership potential in frontline staff. This highly successful initiative guaranteed a pipeline of great leaders within the organization and in the non-profit sector as a whole.

Dyer gives freely of his time and expertise, as both a leader and a doer. In the community, he has played a lead role with the Calgary Marathon since 2010 and recently joined the Bowness Community Association as a board member. Closer to home, he and his family organize community activities that bring the neighbourhood together. From block parties to a Halloween night Trick or Treating Pit Stop where parents and their children can stop in for a warm beverage, Jeff is full of great community building ideas.

People like Jeff – people who take groups of individuals and make them a team, who take neighbours in separate homes and make them a community, or who make people believe in the possibility of a better world – they’re the reason that Calgary is such an incredible city. In spite of what he’s already achieved, he’s not done yet. The amazing fact is that he is just getting started.

Join Jeff and 40 others on his Top 40 quest to raise $40,000 at the 2015 Scotiabank Calgary Marathon on May 31, 2015. Register at www.calgarymarathon.com and choose Accessible Housing in the Scotiabank Charity Challenge.