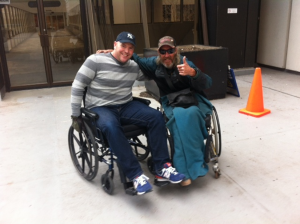 – By Tom, a Bridge to Home caseworker

In November I spent six hours in a wheelchair with one of my clients who is an incomplete quadriplegic and is currently experiencing homelessness. If I had to describe my day in one word it would be humbling.  My clients’ name is Allan; he is 57 years old and is currently staying at The Drop In Centre (The DI).  Allan’s life was turned upside down 11.5 years ago when he was involved in a mountain biking accident that left him in a coma for two months, followed by several months of rehab.

I picked up my wheelchair from the friendly staff at Motion Specialities, a store on Macleod Trail where Allan takes his wheelchair whenever he needs bearings replaced, flat tires fixed, his cushion (which costs $1000.00) to be repaired, etc. When I told the front desk staff that I was going out with Allan who they all know by name, to experience ‘a day in the life’ they generously waived the rental fee.

I drove to the Chinook LRT parking lot where I was to meet Allan at 10:00 am. I parked my car, pulled the wheelchair out of my back seat, sat down awkwardly wondering what people who saw me get out of my car with no problems, set the chair up with ease and sit down would be wondering but I quickly let that go. I rolled up to the bus shelter where I met Allan, purchased my day pass and we rolled up onto the platform and waited for the ‘Blue Light Special’, the wheelchair accessible rail cars that have ramps to board the train. As the train approached, I immediately began to feel anxious, the train and the platform were not level, and the ramp for wheelchairs wasn’t lowering. I tried several times to get on the train but with no such luck, I couldn’t get my front wheels onto the train. The doors where starting to close and other passengers were holding the door open. Allan was telling me to ‘pop my wheels’ but I didn’t know how to do that. Fortunately a strong and caring passerby saw me struggling and pushed all 250 pounds of me with enough force to get onto the train.

As the train started heading towards downtown, I started having thoughts of what would happen if the train broke down in one of the tunnels or if there was an accident. Allan and I would surely be the last ones rescued. I started feeling helpless and vulnerable, something I felt many times throughout the day.

The dynamics of our relationship had certainly changed; I was following Allan’s lead and was looking up to him to get me through the day.  He taught me about trying to wheel as close to the buildings as possible as it’s generally most level and you don’t have to compete with the wind.  He was a master of the downtown core knowing which corners to avoid that were particularly challenging in a wheelchair; he knew where all of the most accessible washrooms were located and which ones to avoid.

We disembarked at a train station on 7th Ave and 3rd St SW; it was definitely a lot easier getting off than getting on. The next stop was the Royal Liquor Store on 4th Avenue where Allan buys his daily 8 pack which helps him get through the day. We then made our way into an office tower and rolled into an elevator taking us to the Plus 15’s. Allan challenged me into trying a wheelchair accessible bathroom stall before continuing on our journey. We both rolled into the bathroom to find an ‘upright’ (as Allan refers to able-bodied-people) using our stall. We waited patiently for the man to come out of the stall before I failed miserably trying to get my chair into this particularly small bathroom. After five minutes of trying I gave up and Allan showed be how it was done with ease, definitely a skill that requires a lot of practice and patience.

We then rolled through the Plus 15’s, getting many stares and looks of sympathy as we  made our way to the Sheraton Hotel where we exited and continued onto Eau Claire Market.  Allan spends a good portion of his day sitting next to a bridge that separates Eau Claire from Princess Island where he likes to watch the world go by, listen to the buskers, and has some friends from The DI that hang out in the area.

As we watched the lunch hour runners cruise past us, it made me realize that had this been my reality, never again would I have the chance to run, ride a bicycle, go ice skating or snowboarding, all of the activities that I enjoy would no longer be possible. I like most people take this for granted. As we watched the runners go by, Allan talked about his time working as a chef in the Canadian Military, serving in Egypt in the 1970’s, he talked about his mother who passed away just a few months after he came out of a coma, and his sister who was murdered 6 years ago.

We eventually rolled over to The Garage, a restaurant in Eau Claire that Allan frequents on a weekly basis. Allan was welcomed with open arms by the staff and most know him on a first name basis. Allan challenged me to a game of billiards which was very challenging and probably quite entertaining for those who sat near us. It was a close game and came down for the final shot which I ended up winning!

From Eau Claire we rolled up to TD Centre to check out Devonian Gardens. The most physically demanding part of the day was rolling from The Spaghetti Factory on 3rd street up one block to the Westin Hotel. There is a slight incline that doesn’t appear to be much but in a wheelchair that was a struggle! Once we got to level ground, a young man that very well might have been homeless offered to push me saying he was going in the same direction. I kindly thanked him for his offer but declined as I naturally wanted to be independent. Throughout the day, many caring people opened the doors for us, gave us the right of way, moved out of our way but I was taken back that somebody that offered to actually help in a more substantial way was probably homeless himself.

Allan and I parted ways back on the 7th Ave C-train platform. By this time I knew to look out for the blue light special and was able to get on the train myself by popping my front wheels. I decided to stay in my chair until I reached my vehicle but felt even more vulnerable with Allan not by my side. As we were getting close to Chinook station, the train was filling up with people but still quiet until the man next to me in a fairly loud voice said, “So what’s your story?”  I felt rather uncomfortable and kind of embarrassed initially, I rolled close him and explained that I am a caseworker and that I work with individuals with limited mobility and spent the day in a chair with a client to gain a better understanding of the obstacles he faces on a daily basis. He laughed initially and then gave me a pat on the shoulder and told me that was a great thing to do and asked me to pass on his best wishes to my client. The train stopped at Chinook, I was able to get off the train with no problems and rolled to my car. Before standing up and getting out of the chair, I took a brief moment to give thanks for the experience and for my full mobility which from this day forward I will never go a day taking for granted. It’s an honour and privilege to work in the capacity that I do with such brave and courageous individuals. I would encourage others to have a similar experience and I know that Allan would be happy to take anybody out for a day in a chair or ‘Wheelchair 101’ as he calls it.